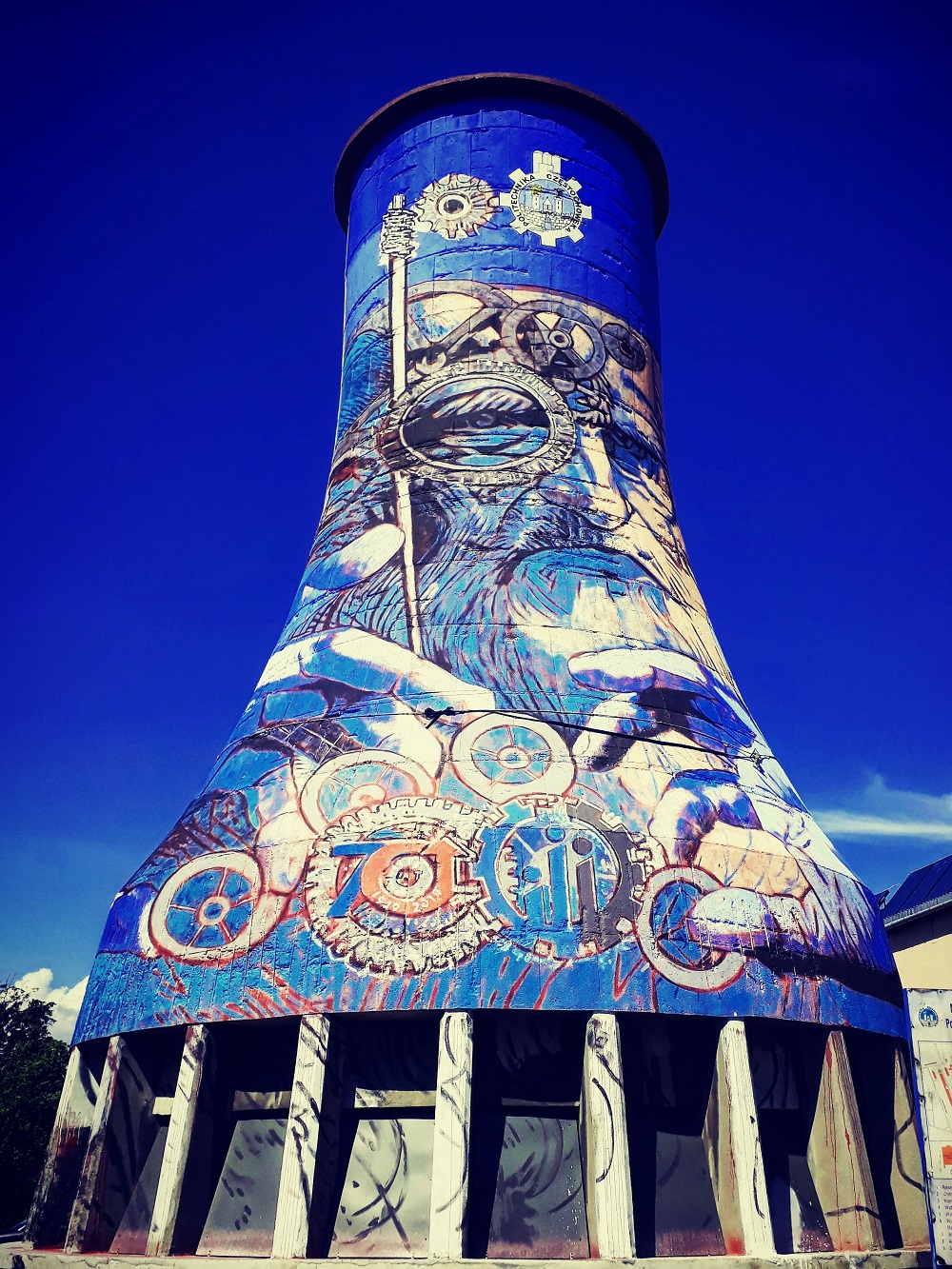 The history of Częstochowa is heavy industry. Education, social life and high work culture were shaped around it. Today, the city is opening up to other industries using decades-long experience in shaping the labour market and educating staff.

Częstochowa is a city that is industrially a common part of mining and metallurgy Silesia, and one of the largest textile centres in Europe – Łódź. The city was the capital of the voivodeship for twenty years, and now it is the capital of the Northern Subregion of the Silesia Voivodeship. Today's local government again focuses on the development of industry and business. The industry has been present in these lands for a long time. The cleverness and entrepreneurship of the inhabitants allowed them to go through the crisis caused by the political transformation and the collapse of large production plants more gently than others. The most important and largest plant in the city was Huta Częstochowa. On its 125th birthday, the steelworks has gained a new owner and the situation of thousands of employees and subcontractors is finally safe.

The metal industry and iron ore processing are the history of this city and its beginning. One of the oldest documents concerning Częstochowa indicates that in 1377 Prince Władysław Opolczyk granted a forge in the village of Błeszno to brothers named Jaśko and Niczko – it happened earlier than the foundation of the Jasna Góra Monastery. This Kuźnica was located on the Warta River, in the area of today's Huta Częstochowa.

The ore-bearing lane continues from Zawiercie through Częstochowa to Wieluń. A primitive method of ore extraction, which relies only on the strength of human muscles, was used in these areas until the 19th century. The development of mining and ore extraction began when Poland was regaining independence. Technological progress started in the 1930s. 426 million tonnes of iron ore remain in Częstochowa deposits. This geological condition and the related skills of the inhabitants influenced the establishment of heavy industry production companies in this area.

In the second half of the 19th century, the Warsaw industrialist Bernard Hantke began to take an interest in wet forest areas along the Warta River. At that time, the entrepreneur was involved in the production of metal products: wire, nails, agricultural and garden tools, chains, etc. In 1896, the construction of steelworks began in this hard to manage areas. The foundations of blast furnaces were created from old oaks growing in the Rakowski forest, and the swamps and oxbow lakes were drained. One of the first buildings erected at that time was the one-story management building. The construction of the steelworks was completed in 1902 – it already had a blast furnace department, a steel plant and a groove rolling mill. In 1913, the steelworks produced 114 thousand tons of pig iron, 87 thousand tons of steel and 81 thousand tons of rolled products. The First World War stopped the development of the steelworks in Częstochowa by cutting them off from the existing markets in the east. The German occupier suspended the plant for almost two years, and just in mid-1916, the rolling mill and steel plant were reopened to a very limited extent. This was due to the demand for barbed wire used in the construction of the front fortifications, thanks to which about 500 people found employment in the plant. After Poland regained independence, a new stage in the history of Huta Częstochowa began. Thankfully, after the war, it did not record any major losses. In November 1918, the rolling mill was launched and renovation works began on the blast furnace No. 1 and in the steel plant. In 1923 the Obereisen concern was forced to sell shares to Spółka Akcyjna Modrzejowskie Zakłady Górniczo-Hutnicze with its headquarters in Sosnowiec.

The life of the entire modern Raków was organized around the steelworks and its everyday reality, it was decided by the elite – the steelworks staff and young people with aspirations. That is the time when Racovia was established – the first sports club of Raków (now Częstochowa), the first canoeing marina, and a well-equipped fire brigade, which was built in parallel with the plant. Another interesting feature was the cycling track called the cyclodrome, a modern hospital with doctors and paramedics, a school, and a kindergarten. Raków, thanks to the steelworks, was an independent city within the city. The financing of civic activity and the implementation of plans was determined by the finances of the steelworks. It provided funds thanks to which, for example, the church of St. Joseph was built.

After World War II, Huta was systematically expanded. In the 1950s, in Mirów district, blast furnaces, the so-called workshop district and a coking coal plant, were made, and in Raków – a steel plant and a pipe rolling mill. In the years 1994 – 1997, a new steel plant was built with a ladle furnace, an electric converter and a continuous steel casting line. At the beginning of the 21st century, the blast furnace was put out of operation, while all employees who operated it remained employed.

From 2005, Huta Częstochowa belonged to the Ukrainian Industrial Union of Donbass and was called ISD Huta Częstochowa Sp. z o.o. The steelworks produced 85% of all plates produced in Poland and sold half of its production on the EU markets and in exports to countries outside the EU. The first half of 2019 brought Huta ISD a significant crisis and on April 19, production has stopped. At that time ArcelorMittal Poland announced the shutdown of the blast furnace and steel plant in Krakow, and Huta Łaziska shut down three ferroalloy smelting furnaces. The Częstochowa steelworks ran out of cash to finance the orders, production was discontinued and the crew was sent on holidays.

The collapse of the plant, which employed 1,235 employees, had enormous social consequences, as thousands of residents are employed in local companies which permanently cooperate with steelwork. On September 4, the court declared bankruptcy, and on September 19, the trustee in bankruptcy leased the plant for 12 months to Sunningwell International Polska sp. z o.o., which also took overall employees and on September 30, Huta resumed operations.

The dramatic situation of Huta and the uncertain future of its employees showed how the situation on the labour market changed in the confrontation, even until the political transformation, when large production plants also collapsed and crowds of qualified workers were left without work – which was one of the reasons for the creation of special economic zones. The modern labour market, which is desperately looking for qualified human resources for industry, reacted even before the steel plant formally declared bankruptcy. In the Center for Better Workplaces in the City Hall, there were representatives of manufacturing companies, who expressed their willingness to hire employees who could lose their jobs in case of the liquidation of Huta ISD.

The long-term domination of the metal industry in the city had a significant impact on the development of the Częstochowa University of Technology, shaping the state and quality of education at this university, which from the beginning of its existence closely cooperates with the industry, being aware that this cooperation determines them.

On May 28, 2021, Huta Częstochowa has finally changed the owner and has ambitious plans to increase steel production to one million tons per year and implement the Greensteel environmental program. The company, which is celebrating its 125th anniversary this year, currently employs 1,126 employees. Częstochowa Huta, which produces steel from scrap and pig iron in the KONEL electric furnace, strives to implement the objectives of the Greensteel program, i.e. manufacturing products with a minimum carbon footprint using modern technologies and energy from renewable sources. Currently, the theoretical production capacity of the company reaches 800 thousand tons of steel per year. The area of Huta, belonging to Liberty Częstochowa Sp. z o.o., covers over 151 hectares with 92 buildings.

Liberty Częstochowa is part of the international group Liberty, one of the tycoons on the metallurgical market, operating in over 30 countries around the world, headed by Sanjeev Gupta, president of the GFG Alliance consortium.

The glassworks exerted the greatest influence on the contemporary shape of the city, but it is not the only representative of heavy industry with a rich historical tradition. The history of one of them began even earlier than the history of the Częstochowa steelworks. In 1894, Seweryn Landau at Teatralna 5 St. (currently al. Kościuszki) built a cast iron foundry – now WULKAN S.A. specialized in casting iron pots and producing box irons. In 1895, the foundry employed 250 workers. In 1899 it belonged to the Russian Metal Trade Society Iznoskov Zuckau & S-ka with its headquarters in St. Petersburg at Grochowa 5 St. and 400 workers already worked there. Today, the industry in Częstochowa is still developing, an example of which can be the ŚLĄSK Ocynkownia, currently the most modern in Europe, as well as family businesses. A perfect example is Staltim – a company with a four-generation tradition – operating in the zone of influence of the KSEZ and APJ Sikora Częstochowa – a company from the 1930s, competitive today even on the Japanese market, performing CNC turning for the machine, medical, lighting and automotive industries.