One in Five Europeans Have Experienced Identity Theft Fraud

Identity theft is rapidly expanding, causing substantial financial loss to millions of people all around the world. This invisible crime is also widespread across the European countries, where the growing number of consumers is targeted by sophisticated fraudulent scams each year, both offline and online.

According to data gathered by Finanso.se, 56% of Europeans have experienced at least one type of fraud in the last two years. One-third of them became victims of identity theft, making it the second most-common type of fraud in Europe.

United Kingdom, Ireland and Denmark Have the Highest Rate of Identity Theft

In 2018 and 2019, the monetary scam was the most frequently encountered type of fraud in Europe with 39% of respondents reporting this type of criminal activity, revealed the European Commission Survey on Scams and Fraud Experiences by Consumers. Identity theft ranked second, with a 33% share in all fraud attacks. Another 23% of consumers reported buying scams, which remains the third most-common type of fraud activity in Europe. 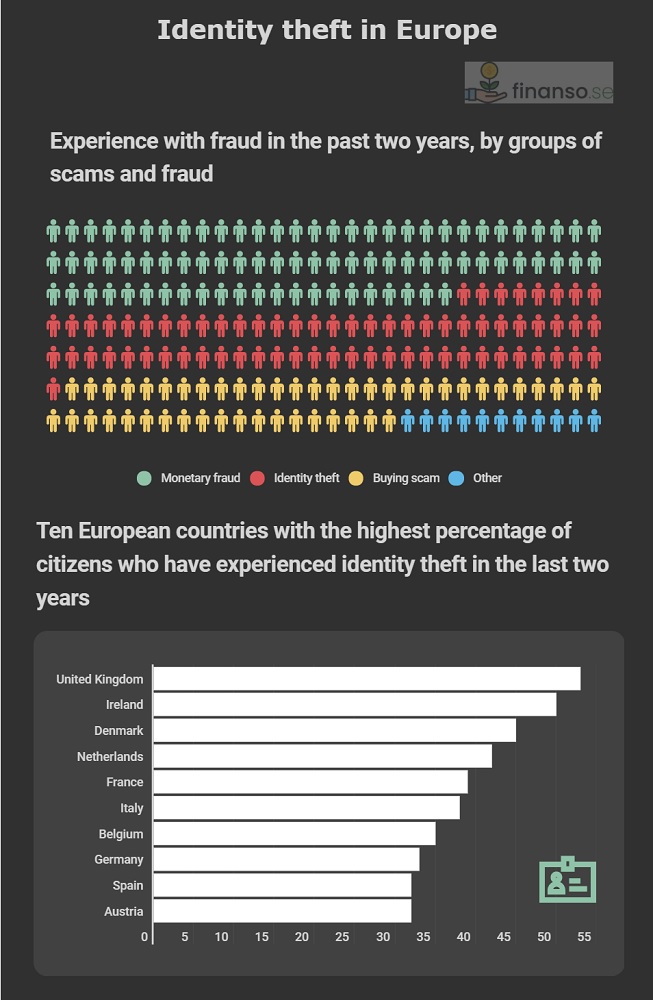 Compared by regions, Western Europeans were more likely to have experienced identity theft fraud in the last two years. The statistics show the United Kingdom ranked as the leading country among them, with 53% of respondents experiencing this type of fraud. Ireland ranked second with a 50% share, while Denmark, the Netherlands, and France follow with 45%, 42%, and 39%, respectively.

Although recent years have witnessed significant progress in identity theft protection technologies and solutions, the survey showed many Western Europeans had significant problems with protecting their sensitive information.

On the other hand, Cyprus, Bulgaria, Hungary, and Estonia had the lowest identity theft rate, all with less than 10% of respondents experiencing this type of fraud.

Analyzed by the method, nearly half of all identity theft attacks in European countries happened by using e-mail. Another 39% of deceivers used the phone to attack their victims. Online ads, text messages, and social media platforms follow with 5%, 4%, and 3%, respectively.

The statistics show 25% of Europeans exposed to any fraud suffered financial damage, causing a total loss of around €24 billion in two years.